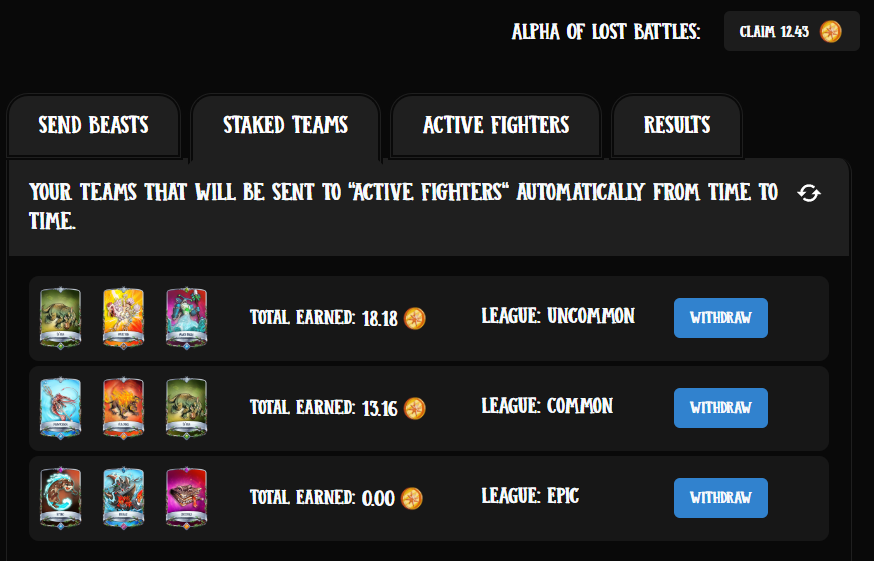 In an interesting move, Beast Garden, a beast owning, feeding, and fighting game on the WAX blockchain, decided to pare down their ecosystem by removing the functionality and generation of BGFOCUS. All of the game functionality is pushed into their other token, BGALPHA.

When we last took a look at Beast Garden, they had added Plant Harvesting and Beast Evolutions with a Mastermind style mini-game. Since then they’ve made a few updates to their game, adding Beast Feeding, passive battles, and a new Battle Pass. Now, in another update, Beast Garden has decommissioned their BGFOCUS token.

In days when it seems that most blockchain games tend to be building with multiple tokens on the blochchain, it’s refreshing to see someone willing to simplify their ecosystem. And certainly, there was little need for two tokens in the Beast Garden. The game seems to be functioning just fine with one.

At the beginning of August, Beast Garden removed the generation and most of the functionality from their BGFOCUS token. No longer will Beasts in your inventory passively generate BGFOCUS. Instead, they generate BGALPHA tokens through Battle Staking and Feeding. For anyone with leftover BGFOCUS, there is still a small market for it on Alcor, or you can gather 1000 tokens and use them to start one trainer battle.

Battle Staking and Other Systems

And speaking of battles, Beast Garden added a new version of their PvP, passive battle system. In the new system, players assemble teams of three Beasts and stake them for auto battling against other players. Teams are sorted based on the rarity of the Beasts and must be staked for 24 hours before they enter the battle queue. Once in the queue, the engage in fights every once in a while, earning BGALPHA for wins. Beasts involved in Battle Staking are removed from the player’s wallet and returned once withdrawn from the staking system.

In addition to earning tokens from battles and passive ownership, players can also feed their Beasts to generate BGALPHA tokens. Fed Beasts can’t be used for any activities for 24 hours.

Beast Garden is officially on Season 3 now, and includes a new Battle Pass to go along with it. Players earn experience towards the Pass by winning Trainer battles. At each level players receive rewards such as a bonus to token income or special Beast NFTs.

Beast Garden also includes a crafting loop, allowing players to disenchant their Beasts for Shards and then spend BGALPHA and Shards to craft new Beasts. New Beasts appear irregularly on the Crafting page and some sell out quickly. Join the Beast Garden Discord to stay up to date on the latest crafting options. A new legendary Beast is due to be released in September!

Beast Garden is currently testing a new user interface, and has plans to implement tournaments in the near future.

Dhirendra Kumar - November 30, 2022 0
Decentralized Finance, or DeFi for short, has gained considerable traction over the years. There is a huge market for its applications, and the DeFi...

Ryan Matta Shorts - November 30, 2022 0
The plunge comes as investors continue to grapple with the stunning implosion of FTX, one of the biggest and most powerful players in the...