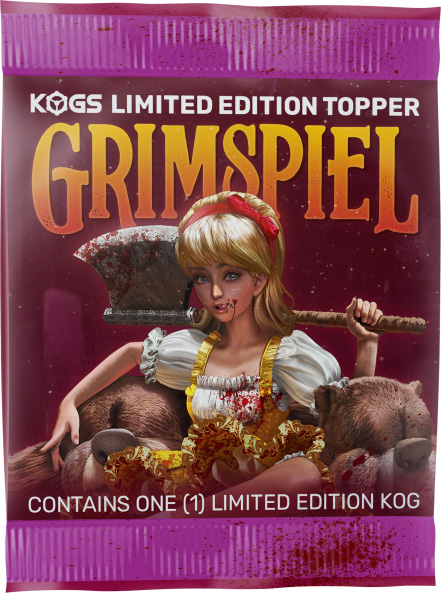 KOGs is an old school, game on the WAX blockchain that we haven’t talked about much in a while. They have their NFT collections and a KOGs mobile game and a staking program, but the KOG utility seemed very limited. Now, for a limited time, they introduce an option for burning second and third edition KOGs to receive packs of a new KOGs collection called Grimspiel.

KOGs, the NFT collection, was introduced as an acronym, Keys to Other Games. And while they can be fun to collect, and they had their heyday with the release of the initial set, the Keys and Games part has been missing. They do have one game, KOGs: SLAM!. A mobile version of the old, real-life POGs game which involves slamming tokens into a pile of other tokens. Unfortunately, it doesn’t really transfer so well into the virtual world. Though apparently some people find it enjoyable.

But for all of those sitting on piles of KOG NFTs, who don’t play the game, beginning in July 2022, you’ll have another option for them.

On July 13th, KOGs introduces a new burn/crafting mechanism. Players log into their collection at the KOGs site. and use the new Redemption function. Players need to have 36 KOGs ready to burn, all from either the second or third edition (you can’t mis editions when crafting). The KOGs cannot be tubed or staked anywhere. The crafter needs 20 common KOGs, 10 uncommon, 5 rare, and 1 ultra-rare to craft.

This Redemption option only lasts until August 3rd, 12pm SGT. It will be interesting to see what effect this has on the KOGs market. Though there is little demand for most of them, there really aren’t that many KOGs in circulation. And a good number of them are locked up in tubes and staked. Will the demand for this new set be enough to stir up some market action? Personally, I’m interested, though I would like to see what this new set looks like. Hopefully we’ll get some more detailed info soon!

How to play KOGs: SLAM!

Developed by a group called RFOX Labs, KOGs: SLAM! is mobile only and currently in open beta.

The play the game, you must build a deck with 40 KOGs and a Slammer. The object is to slam your Slammer into the pile of KOGs and make them flip over. The player who flips the most wins the game. Players use their finger to drag the Slammer into position, wiggle it a little if they want spin, and then slam it down into the token pile. Players can practice with their own KOGs, play a solo PvE mode against Bosses, or duel it out with another real player. The game also features daily quests with coin rewards. Spend coins to buy packs of KOGs.

The GameStop Wallet is now Available on Immutable X