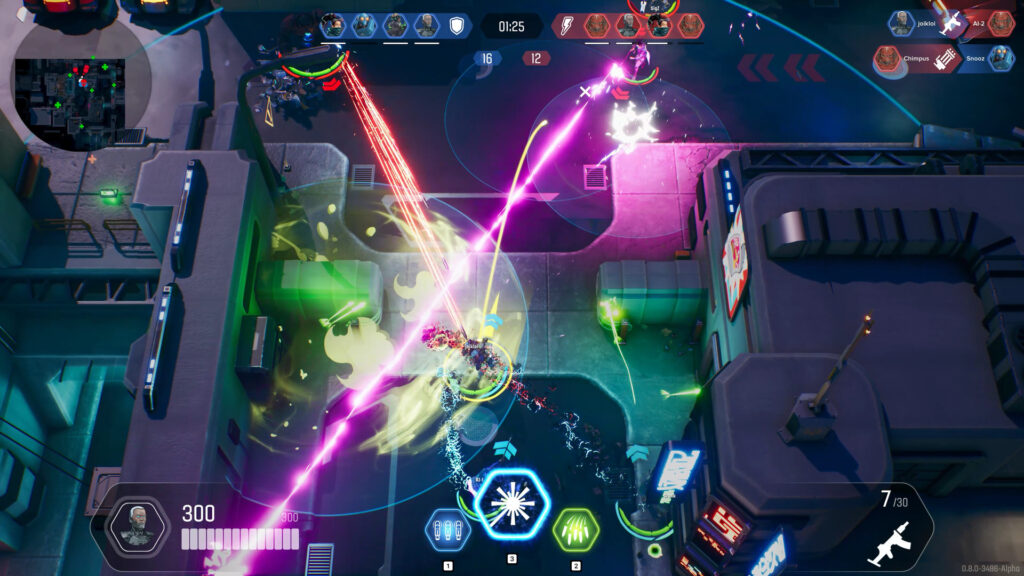 Many blockchain games with long term development cycles have taken to releasing small Discord or web-based games to keep their players entertained while they wait. Sometimes these filler games are in the theme of the primary game, or even feed into it somehow. Civitas, however, decided to take a different approach, releasing a top-town MOBA on Steam called The Machines Arena!

Building a game can take a while. And many blockchain games have adapted a mechanic to keep their initial investors engaged and interested. This often involves building a Discord or web-based game, usually related to the main game in some manner. But Civitas has chosen to go a different route, creating a top down, multiplayer, online, battle arena game in the Unreal engine to showcase their developers’ abilities!

This game is called The Machines Arena.

The Machines Arena is a quick, action-packed, MOBA game pitting two teams of four players against each other. Wielding weapons such as guns, lasers, and flamethrowers, players fight in matches that typically take 5-10 minutes. The game looks nice and plays smoothly.

The game is still in development and flagged as early access on Steam. And though officially in ‘closed beta’, to play, all you have to do is click the request access button on their Steam game page. Though the game still has some rough edges, and the current playerbase is small, overall, the response has been positive.

The game takes up about 20 gigs of hard drive space, and requires a Windows 10 or newer operating system. Players can find the game at the Steam store web link (https://store.steampowered.com/app/1539860/The_Machines_Arena/), or by searching for it in the Steam client.

The Machines Arena is not a blockchain game and does not include NFTs or any tokens or built-in rewards, though they are currently keeping a leaderboard, with Steam gift cards as prizes for the top finishers.

Civitas is a co-operative, competitive, multiplayer city-building game. Players group together in cities, construct buildings on their plots, harvest goods, engage in an augmented reality experience to find special resources, and work with other players to make their city the biggest and the best!

Players gather resources, construct buildings, craft items on their land plots. They can also experience the world through an augmented reality app on their phone. The AR functionality opens up mini-games and the chance to find unique resources. The game will be free to play, though to participate in the governance and decisions of your city, you will need to own a plot of land.

Each city functions as a mini-DAO, called a subDAo in the Civitas whitepaper, with players voting on various governance options within their city. Though there is no direct PvP in Civitas, there will be leaderboards and competition for bragging rights. Each city has a tower that inhabitants of that city can visit. Inside they will find stats and info about their city, as well as potential quests and other DAO related business.

Civitas features unique PFP NFTs that also function as 3d game avatars. It will also have its own token, called CITI.

Civitas expects to have something to show us by the end of this year (2022).

Eliman Dambell - November 28, 2022 0
Dogecoin was down by as much as 10% to start the week, as the token retreated from Sunday’s high. The meme coin raced to...