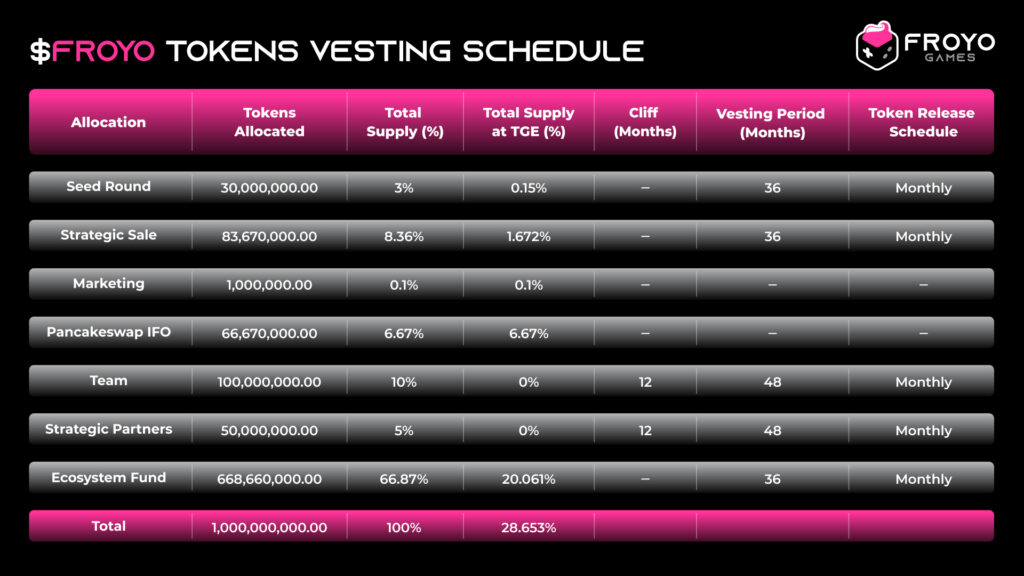 Froyo Games recently announced that they’re developing four games within their new multi-chain gaming metaverse. Let’s take a look at their project and how they could become Gala Game’s newest competitor.

What is Froyo Games

Froyo Games is a multi-chain (BSC and ETH) gaming metaverse brought to you by a team of over 500 game developers covering 350+ game titles with over 360 million cumulated downloads.

With decades of experience in different markets, the team behind Froyo wants to launch entertaining multi-platform games, and provide developers a flourishing metaverse ecosystem to publish their games.

It’s fair to consider their approach similar to Gala Games as they want to provide more than one game. But Froyo Games has something else to offer to game developers: their SDK.

Froyo Games wants to be an open platform for all game developers to start using the blockchain to verify transactions, guarantee in-game ownership, and reward players. To achieve this, they will release a full set of SDKs to make it easy to convert “traditional” games into fully decentralized applications.

The team also announced a launchpad for promising games using their SDK. The platform is planned to be launched in Q3 2022.

In their most recent video, Froyo Games announced the release of:

It’s not the first time that a company in the play-to-earn announces many games all at once. Gala Games did the same over a year ago. However, if they manage to ship all these games within the first two quarters of the year, they will instantly become a power player in the industry.

According to their roadmap, Claw Stars and Maskeeters will be the first in line with an NFT drop and in-Game Asset launch in Q1 2022.

In addition to their main titles, Froyo Games will also launch GameBox, a prize-based ticket event where players can earn big rewards with little to no investment. This is to supplement the democratic earnings in their metaverse of games, which is an aggressive advertising strategy.

$FROYO is a fungible BEP20 token that lives on the Binance Smart Chain. Aside from being the main currency in the Froyoverse, $FROYO will be used for participating in game launches, ve-mechanism farming, P2E rewards, staking, liquidity mining, and utility within the Froyo Games platform’s ecosystem.

The total supply for $FROYO is 1,000,000 and no additional tokens will ever be minted.

With solid Tokenomics and a good team backing the project, Froyo Games is coming in the play-to-earn market with an ambitious vision. Now let’s see if they will be able to deliver.

Adam Shamma - May 23, 2022 0
https://bit-atom.net/ cryptocurrency, crypto-currency, or crypto is a digital currency designed to work as a medium of exchange through a computer network that is not...

Sunil Sharma - May 23, 2022 0
PayPal, known globally for being one of the world’s leading online payment systems, would soon accept all forms of crypto and blockchain services. This...