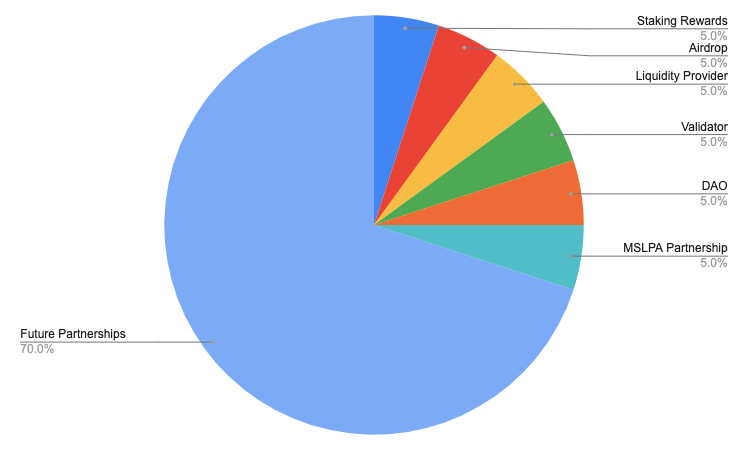 The Splinterlands team recently revealed that they were working on a franchise of sports related games, starting with Genesis League Soccer. That franchise, known as Genesis League Sports, just released their whitepaper, providing some details about their plans for this sports-related, play to earn ecosystem.

This gaming ecosystem will run on the Hive blockchain. Splinterlands has been on Hive for years and the team feels confident in its ability to handle the transaction load. And since Hive offers free transactions, players only have to pay market fees when buying or selling NFTs.

As for the governance token, each GLX token will provide one vote in the DAO organization. Distribution and staking of GLX works just like the SPS token. In fact, SPS stakers will receive an initial airdrop of 100,000,000 (100M) tokens, vested over 12 months. Additional distributions go to those who stake GLX, liquidity providers, validator rewards, the DAO fund, and initial play to earn rewards. However, the bulk of the tokens, 70%, are reserved for future partnerships. Interestingly, the team will put forth proposals for partnerships, which are then voted on via the DAO.

And once the DAO system is live, for a small fee, anyone can submit their own proposals. The vote then has to meet a certain minimum percentage of available votes, and pass with the approval rate (exact numbers not yet known).

The DAO replenishes its funds from market and game fees, and whatever other sources the DAO appproves.

The GLX airdrop is planned to begin in October of 2022, with DAO staking and governance coming soon after.

Genesis League Sports will support their own validator nodes, with a free license airdrop to those with SPS validator node licenses. These licenses allow anyone to participate in maintaining the ecosystem in return for token rewards. GLS wants to include different game modes for their sports projects. This could include manager games, where players create their NFT lineups and submit them for results. It could also include fantasy and prediction brackets, with the outcomes based on the productivity of the real life players.

GLS plans to have their own NFT market and rental system. In addition, they want to offer Stadiums and arenas as NFT assets that players can improve and level up.

All of the games on the Genesis League Sports system will include play to earn opportunities. This is done via a rewards shares system. This sort of system is being adopted by more blockchain games as a way to spread the wealth while also rewarding those who play the most and win the most. Basically, every win during a period (usually a day) earns reward shares. At the end of the day, everyone receives a percentage of the rewards pool based on what percentage of the total reward shares they earned that day. Rewards shares can also sometimes be affected by the types of NFTs used, amount of tokens staked, guild membership, etc.

So, in summary, take all of the features from Splinterlands and put them into games based on real life sports and you have Genesis League Sports! Sounds pretty good to me!

New Crypto Regulation | What You MUST Know

Andrei Jikh - October 1, 2022 0
Explaining the new crypto regulations from the White House: ► Get 20% Off (Limited Time Only): https://shop.ledger.com/products/ledger-merge-pack/?r=535643c13ab0 Safely store your crypto and NFTs with the Ledger...

Jamie Redman - October 1, 2022 0
The largest decentralized exchange (dex) platform by global trade volume, Uniswap, is looking to raise between $100 and $200 million, according to a report...

KEEN-facts-WORLD - October 1, 2022 0
hello viewers, i hope u like this video. subscribe the channel for more videos. source

New Crypto Regulation | What You MUST Know