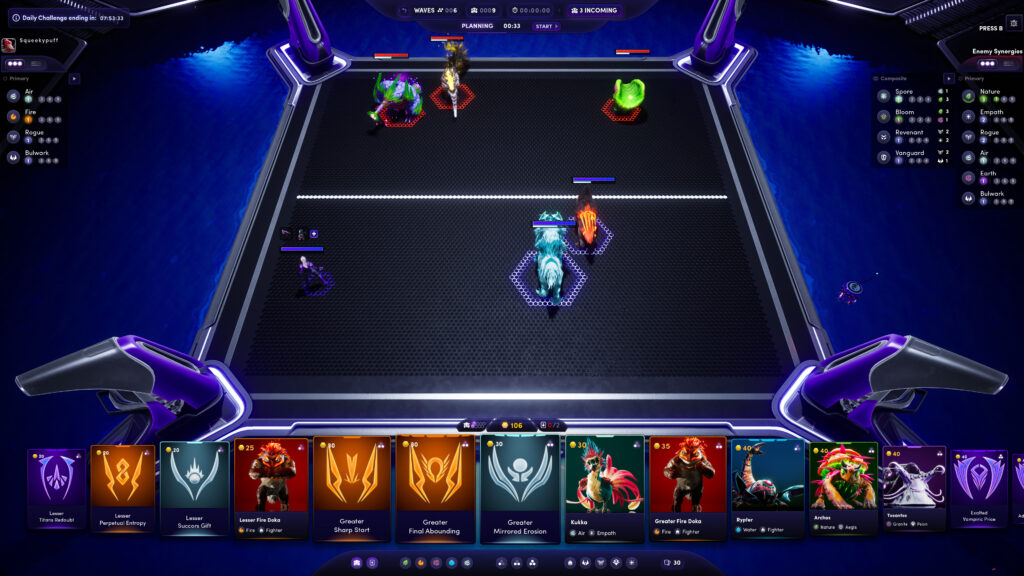 Illuvium releases a new, large patch for the beta version of their game. Known as Private Beta 2, this patch introduces new gameplay mechanics and sweeping unit changes for the Illuvium Arena game. This beta is currently only for Illuvium Arena, the auto-battler portion of the larger Illuvium universe.

Illuvium Arena, the PvE auto-battler section of the Illuvium gaming metaverse, releases a major update for their beta playtest. So big in fact, that they had to give it a new number! Private Beta 2 brings a slew of updates and features to the game.

Everyone from Private Beta 1 automatically has access to Private Beta 2, though you do need to manually download and install the new version. If you’re not in the beta, you can apply on their website for access.

The biggest game mechanic changes (aside from updates to nearly every Illuvial), are the additions of checkpoints, Augments, and Bonding. Bonding lets the player’s Ranger connect with an Illuvial, gaining their dominant synergy, and giving the Ranger a composite synergy. Synergies provide special bonuses and stats.

Beta 2 also introduces checkpoints every 5 levels, which is a very useful addition. As you might guess, checkpoints let you try again after losing a round, without having to start all the way at the beginning. Once you hit a point where you’re tired of playing or don’t feel like you can advance any further, you can choose to give up, tallying your progress in the daily leaderboards.

And then we have Augments. Augments are attached to Illuvials to provide them with additional abilities. Players can use Augments to improve an Illuvial’s natural abilities, strengthen their weak points, or just enhance their arsenal. Players can recall Illuvials by dragging them off the board. This will refund their cost and return any attached Augments.

On top of that, we have over 100 new units and reworks to nearly every unit and ability in-game for balancing and providing additional synergies! Read the official patch notes for a full list of the changes with this release.

The game is PvE only at the moment, with players competing to see who can survive the most number of battles. But, with unit placement, special abilities, synergies, and now, augmentations and bonding, there is plenty of room for strategy in Illuvium.

Illuvium is an open-world RPG adventure game built the Ethereum blockchain, but using the Immutable X layer. Players journey across a vast and varied landscape to hunt and capture all kinds of creatures, the so-called illuvials. Together with their little creatures, players need to discover what caused the cataclysm that shattered the world.

Though the core Illuvium game is an open-world adventure game that is part auto-battler and part creature collector, the Illuvium web3 space encompasses more. For example, the upcoming Illuvium Zero will be a land-based builder game. However, this game will still have ties into the main game by producing resources that can be used in Illuvium Overworld.

Illuvium Overworld, the open-world, RPG, will feature over 100 Illuvials to capture, each with different attributes and powers. Capture them, upgrade them and combine two Iluvials to fuse a new one. Gamers earn ILV tokens through play and become part of the community through token ownership. Players can store their Illuvials on Shards, a bit like a collectible card. These cards hold the essence of an Illuvial. Players can trade shards in the marketplace or give them to a friend.

Illuvium has its own marketplace known as the IlluviDex.This will serve as a central point for trading all things Illuvium related in the future, but for now, only land trading is available.

The auto-battler part of Illuvium is currently in beta testing. Check out our beta video review from Bruno below!

Pratik Bhuyan - November 30, 2022 0
Pavel Durov, the founder of Telegram, has revealed that the messaging service intends to launch decentralized cryptocurrency products in the near future. These products...

Anvesh Reddy - November 30, 2022 0
Kraken layoff news: U.S. based crypto exchange Kraken announced it is reducing its global workforce by around 30%. The exchange cited its plans to...