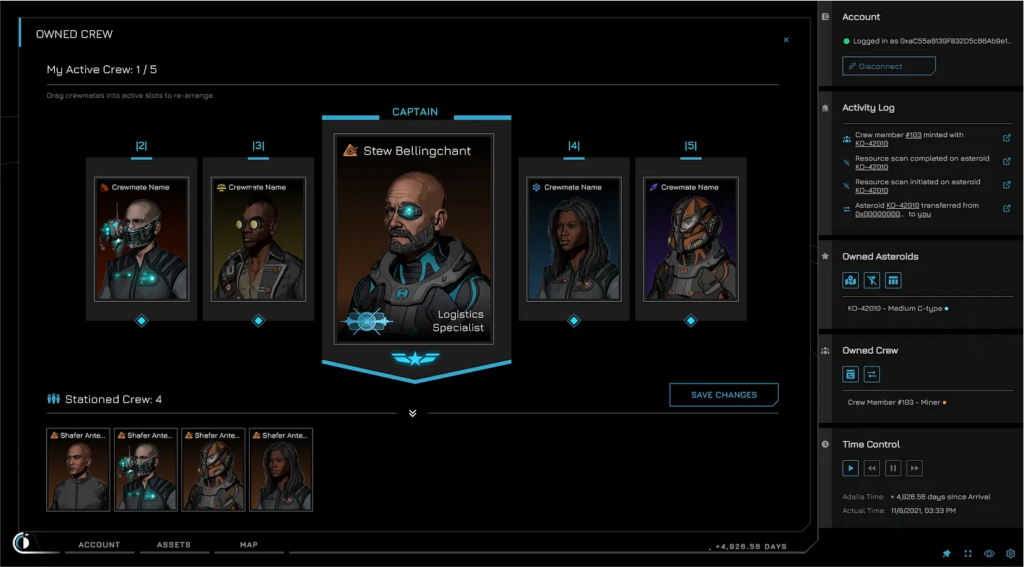 Influence announced Phase 2 of their test and earn events is coming at the end of August. This physics-based, space strategy and RPG about colonizing an asteroid belt around a distant star, builds toward a migration onto a layer 2 solution called Starknet. Any major code update needs testing, and for one as important as this, they need lots of testers. And that’s where you come in!

The summer of blockchain gaming isn’t over yet. There is plenty of action happening this month. And one, a test and earn event from Influence, lets players earn SWAY tokens, simply by testing a few basic features for them.

The first Test and Earn event Influence ran was a success. Over 1,000 players participated, minting 11,101 Asteroids to test some basic, but important, game functionality. On August 28th, Influence returns with Test and Earn Phase 2. This event is open to anyone and everyone. No NFTs or tokens required!

Influence has partnered with Starkware and Immutable to run their game on a Layer 2 network. But, they still want to provide options for players to move their assets off the network if they desire. And, they also need to let everyone who already has existing Asteroids and Crew to migrate them over to the game.

And so, this event focuses on minting new assets and bridging them between L1 and L2 layers on Ethereum, though players also get a chance to play around with the new Crew Management Console.

The assets available for minting during this event include Asteroids and Crew members. Since this event happens on the Goerli testnet, all of the ETH used for purchases and transactions is play money. There are a couple of faucets where you can receive free ETH on the testnet. Though you might want to stock up before the event. Be sure to read the official Phase 2 guide for all the details about participation.

This event runs in two parts. The first, from August 29th through September 4th, provides 10,000 Asteroids available for minting, though each player can only receive rewards for minting 10. Crew minting, however, is unlimited, with global rewards capped at 75 million SWAY tokens. For the second phase, Influence offers 500 Asteroids per week for four weeks (max rewards are 1 per wallet). The second phase also features unlimited crew minting, though the rewards are capped at 25 million SWAY.

Rewards are broken down as follows:

Influence is a space-based MMORPG. In Influence, a colony ship has arrived at its destination, only to find uninhabitable planets. After much debate, the commander decides that the passengers and crew would set up camp in an asteroid belt and begin building a new civilization. Players have already begun to lay claims to Asteroids in the belt, and soon will come mining crews, bases, merchants, wealth, and inevitably, conflict.

In addition to the Asteroids and Ships, players also own Crew NFTs. Crew have the option of creating a background storyline. This is done through a text story where the player makes choices for the Crew member. Based on those choices, the Crew receives certain traits that affect their in-game skills allowing players to personalize their NFTs.

And though the space MMO genre is becoming increasingly crowded, Influence is offering some unique features that make it stand out. Mainly, its adherence to a realistic simulation. Not only are the resource production processes complicated and based on real life, but the Asteroids themselves include orbital dynamics! This is not a static map. All the Asteroids are constantly moving in their orbitss. Each Asteroid has an orbital period (how long it takes to complete one orbit), a semi-major axis (how far it is from the center), inclination (how angled the orbit is off from the orbital plane), and eccentricity (how stretched the orbit is from a perfect circle)! This all plays into effect as time progresses, causing the distance between any two Asteroids to vary daily!

Hopefully, the interface will make it an easy process for regular gamers to get into the game and enjoy the details. There certainly will be a lot to process! Luckily, some people are already building tools to help players figure out the complex production processes. In fact, Influence recently held a community vote to choose a number of third party projects to receive a stipend of SWAY tokens to continue their work!

Terence Zimwara - November 26, 2022 0
Despite the Central Bank of Nigeria (CBN)’s Feb. 5, 2021 directive that instructed banks to block crypto entities from the financial system, the demand...

Ashish Kumar - November 26, 2022 0
Sam Bankman-Fried (SBF) led the FTX crash has caused a heavy dent in the digital asset market. As the FTX contagion is on a...