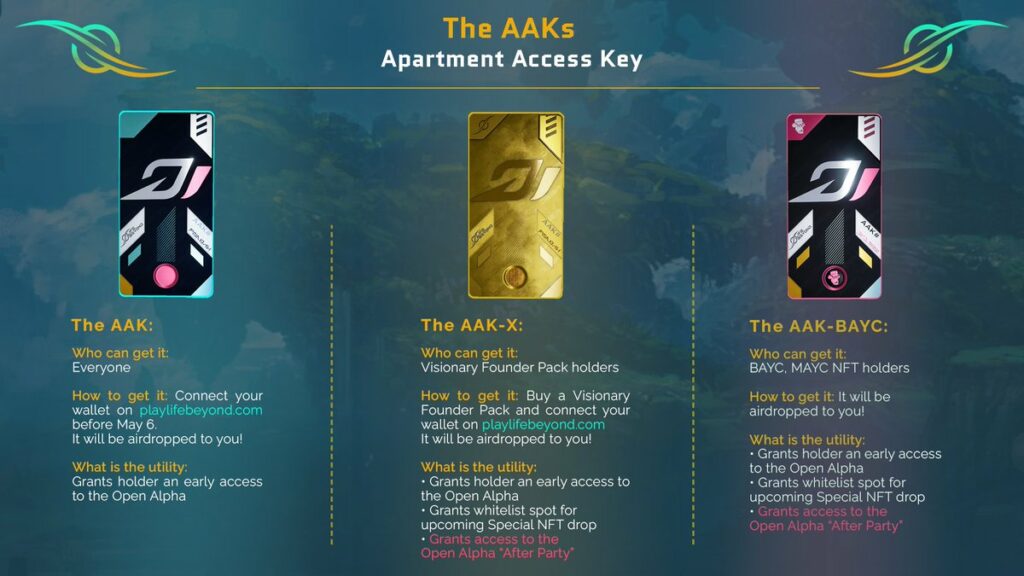 Life Beyond, a sci-fi-themed MMO built on the Ethereum blockchain, announces dates for both early access and open alpha. Though we don’t have any details about how much gameplay we can expect to see in this alpha, Life Beyond has promised us a new world to explore and conquer, so the expectations are high. Early access opens on June 29th, with an open alpha following on July 6th.

The blockchain space has long seemed a great fit for MMO games. And though there are many in development, only a few are even in an alpha release stage. Soon, we can add Life Beyond to that second list. On June 29th, Life Beyond opens up its first alpha playtest. Initially, only those with early access can play. But, after a week of restricted access, the alpha opens up to everyone on July 6th.

Early access is open to those with Apartment Access Keys (AAKs) of any level. AAks come in three types and are dropped to purchasers of Founder packs and owners of Bored Ape Yacht Club NFTs.

There is also a Dolos Passport NFT that is not yet available. It claims to offer entry into open alpha, whitelist access, as well as boosted alpha rewards. However, there are no alpha rewards at the moment, and buying a Dolos passport will cost five Apartment Keys! This seems to be an NFT to placate the whales who bought up the lower cost packs and/or an attempt to reduce the supply of basic Apartment Keys, though I’m not sure why that’s necessary.

Anyway, Life Beyond alpha is coming soon. Get your AAK if you want early access!

What is Life Beyond?

Life Beyond is a sci-fi, multiplayer, adventure game with a third person perspective. Players take the role of Pioneers as they help tame a new planet called Dolos. Full of wild and dangerous creatures, Dolos offers players opportunities to carve out their own place in this new frontier. But it’s not just wild creatures on the planet. There are also mysterious ruins to explore. Are their secrets worth the potential danger?

And though the official trailer only shows combat, the game also promises land and store ownership with players opening up new regions to settle as the game progresses. The game also plans to develop a crafting system with customizable weapons and equipment. There really is no character development in Life Beyond. Instead, each character’s abilities and potential is decided by their tools and equipment and the player’s knowledge and skill. The game will feature a set of narrative story arcs, with each one unlocking new areas or gameplay on completion. Once a region is liberated from the nano-bots (alien tech that controls objects and creatures), the land is opened up for sale to players. Lands generate tokens and resources.

The game is still in early development. And like many MMOs, promises everything a player could want and more! But can they deliver on these promises? The upcoming open alpha should tell us a lot more about

Players can still buy Founder NFTs, or Visionary Packs. These packs offer access to all alphas and betas, token and NFT airdrops, whitelist spots, digital art books, and more! Pack purchasers are also awarded with an airdrop of an Apartment Access Key, or AAK. Players with Apartment Access Keys receive a customizable living space to decorate and call home.