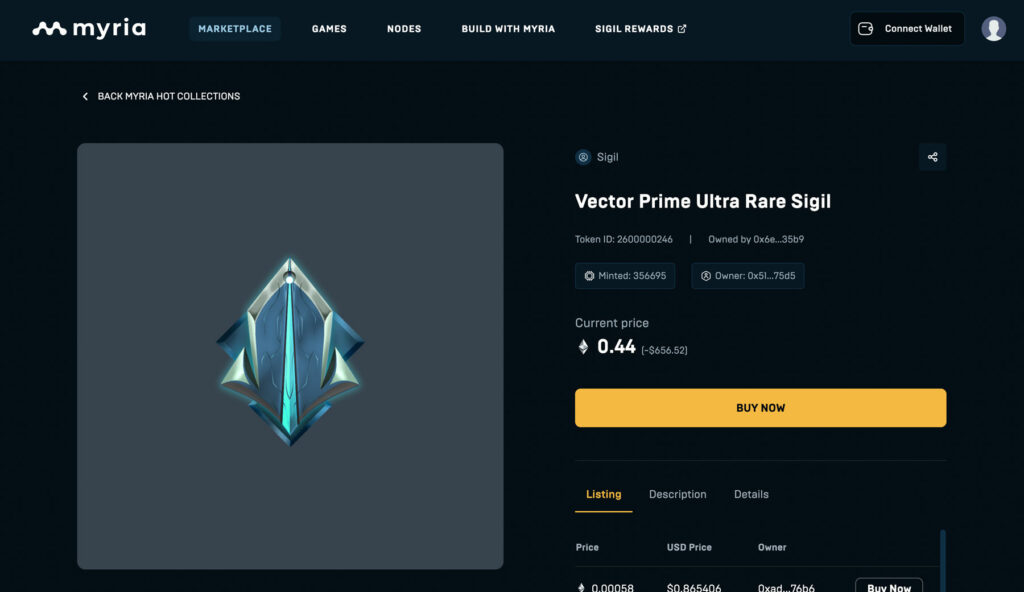 Myria made a lot of progress since we introduced you to the project back in May. We did not expect this announcement to come so soon, but here it is, Myria’s Ethereum Layer 2 solution is here and live, alongside their developer toolkit and their own NFT marketplace!

Myria has three main focus: developers, gamers, and its in-house gaming studio. This week they announced the launch of their Ethereum-based Layer 2 scaling solution, alongside the Myria wallet, an NFT marketplace and their developer SDK toolkit. The only thing still missing is their first game release, but given the pace at which the projects are moving, it shouldn’t take too long until we see a first title coming out of Myria studios.

The first and biggest piece of the puzzle is without a doubt the Myria chain. The team chose to create an ethereum-based layer 2 in order to take advantage of Ethereum’s network size, decentralization and security while offering gas-free transactions to its users. This should benefit both developers and gamers.

Myria’s scaling solution uses zero-knowledge proofs model which should be able to handle up to 9,000 transactions per second. The transactions on the Myria network are agreggated before being sent to Ehtereum’s mainnet. This model should speed up transactions and reduce their cost to almost zero. The team promises gas-free minting and NFT trading and near-instant transactions.

Who says new layer-2 solution, says new wallet, and of course an in-house NFT marketplace. Users can create a Myria wallet in just a few clicks by connecting their Metamask wallet. The flow is super smooth and easy. The wallet is non-custodial, meaning that you remain full control over your tokens and NFTs. At the moment, there are no bridges to transfer assets to and from other chains, only native tokens and NFTs are supported. But if existing ethereum-based projects decide to take advantage of Myria’s infrastructure a bridge will certainly be built in order to transfer assets to and from Ethereum’s mainnet.

The marketplace looks similar to what we are used to in the space. The marketplace will be used to trade NFTs hosted on Myria. At the moment, the choice is quite limited. Only Sigil NFTs are available at the moment. These NFTs are available now available for minting to the users who joined their program announced a couple of months ago. The minting is free, and so are all transactions on the marketplace. We still don’t know the full extent of the utilities of these NFTs, but holders will probably be eligible for airdrops and upcoming mint whitelist spots, or even additional free mints. So if you have one, might be smart to hold one to it.

Myria surprised us by launching their developer tookit at the same time as their layer 2 solution. The SDK allows for execution of complex blockchain functions, NFT minting and wallet connection. Their API approach, abstracting smart contract coding, should attract game developers who don’t want to learn new complex languages in order to put their project on the blockchain. Several other SDK tools are in the pipeline for future launches.

Developers deciding to join the ecosystem will also be able to benefit from Myria’s team expertise in terms of tokenomics, legal compliance and marketing. For more information, check out their dedicated page here and the SDK documentation and code examples already available on docs.myria.com.

What’s next for Myria?

After this release, the challenge for the team is now to onboard new developers. We know that the team has already some ongoing partnerships with developers and IP owners and we can expect further announcements in the near future.

The other thing we are waiting for is the first game release from their in-house studio. Ath the moment, seven titles are in development, but no launch roadmap has been announced yet. But judging by the speed at which the team delivered so far, I am pretty sure that we will see the first releases sonner than expected. A project to keep a close eye on! Stay up to date by visiting myria.com and following their social channels.